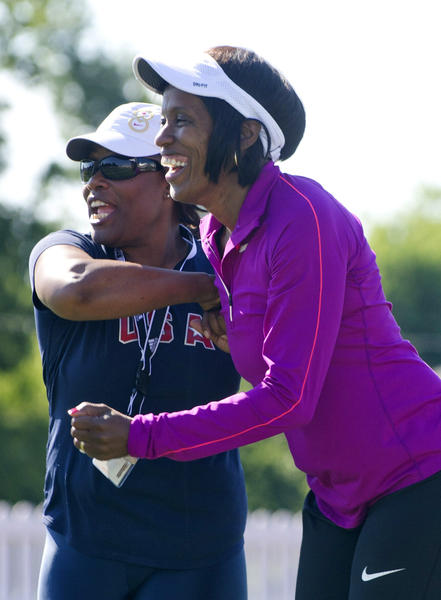 Tyson Gay didn’t make it back to Danville this year, but the woman who helped bring him to the Maximum Velocity Track and Field Academy in 2011 said fans of the sport will be seeing plenty of him in the coming weeks.
Sharrieffa Barksdale, a former U.S. Olympic hurdler and one of the organizers of the camp at Centre College, said she thinks Gay will win the upcoming Olympic trials and “be a force to be reckoned with” at the London Olympics later this summer.
Never mind that the Kentucky sprinter has raced only once in nearly a year. Barksdale said she saw and heard enough from that race earlier this month to convince her that Gay is back.
Gay has been rehabilitating a surgically repaired right hip, and he returned to the track June 9 at the Adidas Grand Prix in New York to run a “B” race in the 100-meter dash into a headwind in 10.00 seconds.
Barksdale, a friend of Gay’s and a manager for the U.S. Olympic track and field team, said her assessment of that race and an exchange of text messages with Gay convinced her that the Lexington native can be one of the best in the world again.
“I think after seeing Tyson run ... at the Adidas meet, Tyson is ready to show up and show out,” Barksdale said. “I think that he’s going to surprise a lot of people, because I think a lot of people they have doubts that he can come back. And I say that if Tyson stays healthy and makes all those rounds (at the trials), he’s going to be a force to be reckoned with.”
She said Gay had his own doubts before the New York race, even though he said he felt strong enough to run well.
“He was saying that particular race meant everything to him, because in his mind, he was saying, ‘Can I really do it? But I went out there and I did it, so I know that I am ready,’” Barksdale said. “The race ... at the Adidas meet was a big burden lifted off of Tyson’s shoulders.”
Gay will need to finish in the top three at the U.S. Olympic trials in Eugene, Ore., where the preliminaries, semifinals and finals will be contested in a span of about 24 hours beginning Saturday.
Barksdale said she’s convinced that he can do even better than that.
“He’s about to blow a lot of people’s minds. Because he hasn’t raced in an entire year, and he had surgery after surgery, it’s in a lot of people’s minds, ‘Can he come back? Can Tyson Gay do that and represent not only the state of Kentucky but the U.S.A. team?’ And I think that he can do that. I think that he will be on the Olympic team,” Barksdale said. “In fact, I’m going to go on and say he will win the Olympic Trials.”
It won’t be easy. Three Americans have already broken the 10-second barrier this season, including former Olympic gold medalist Justin Gatlin.
“He’s back and I’m so proud of Justin,” Barksdale said. “I think that this year, the United States will go over there to London, and we’re going to bring back a lot of medals.”
Gay, who holds the American record in the 100 with a time of 9.69 set in 2009, told The Associated Press last week that he thinks it will take a 9.8 to make the team that will compete in London beginning Aug. 3.
“He’s going to leave it on the track. His little feet are going to go as fast as his hands can go,” Barksdale said.
Barksdale said she thinks Gay will benefit by coming into the trials — and the Olympics if he qualifies — without the high expectations he carried when he was at the top of the sport.
“Now he’s going as an underdog. No one’s really looking at him like they did before, and that’s good, because everybody’s not focused on him,” she said.
She said Gay did, however, generate a great deal of discussion around the Kentucky track community after his performance last weekend.
“Everybody tweeted, everybody was on Facebook, Myspace, saying, ‘He’s back.’ That’s the thing about Kentucky and all the positive people. They were just so happy and so proud that he was out there and back, just back,” Barksdale said.
She said a successful summer might even allow Gay to extend his career.
“I think he wants it bad enough. I think if — not if, but when — he makes the team ... and does very well and gets a medal in London, he will come back next year,” she said.
Gay was arguably the biggest draw at the Centre camp last year, and Barksdale noted that he took the time to pose for a photograph with all 169 campers, even in 90-degree heat.
“He did not grumble, he did not say one word,” she said. “He’s the most respectful young man that you will ever come across.”
But she said it was too much to ask of Gay and the other potential Olympians to return this year with the trials so close at hand.
“We wouldn’t expect them to come down here and do this camp two weeks out (before the trials), because that’s being very selfish of us,” Barksdale said.
Copyright © 2012, AM News
Posted by Maximum Velocity Track and Field Academy at 9:20 AM