As many of you know, Jamie Nieto was injured in a very serious accident on April 23rd. Here is the latest information that we have. 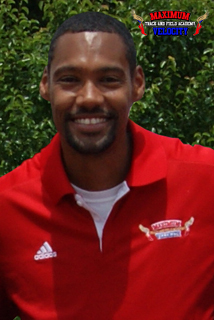 Jamie was coaching his group of jumpers at Azusa Pacific University and at the completion of
training they were doing back flips. Initially on the HJ pit, then on the ground. Most of you probably remember this was Jamie’s signature move. After every competition, good or bad, Jamie would wave to the crowd and do a back flip or back handspring.
While doing one of these back flips, something happened and he didn’t complete the rotation and landed on his head. He fell to the ground and was immediately paralyzed. He couldn’t feel his body and was having difficulty breathing. 911 was called and EMT’s arrived rather quickly on the scene. Understanding the severity, the helicopter was called to the track where he was airlifted to USC Trauma Center. While in the helicopter, Jamie was put on a ventilator to help him breathe. On arrival to the trauma center they moved Jamie almost immediately into the MRI machine to assess the damage. Just before the MRI, Jamie started to regain feeling in his hands and in his feet. He still couldn’t move any of his limbs and his breathing was still labored.

The MRI Results/Surgery
The results showed no breakage of the spine and no cuts in the spinal cord, but the C3 and C4 vertebrae had been compressed and the disc between them had been forced forward into the spinal cord. They decided to operate and remove the disc. They had to enter the neck from the front to access the disc and remove it. They also fused the spine together at C3-C4. The surgery was a success and now Jamie is fighting through the rehab process.

Rehabilitation
The progress Jamie is making is definitely positive. He is able to breathe more comfortably now, he is swallowing liquids and soft foods now. His movement is coming back slowly. At last check this morning (Tues 4/26) he was able to shrug his shoulders and lift his forearm. He still didn’t have movement of his fingers but he was able to lift his arm with more strength and control than the day before. His lower body has feeling and he can recruit and fire the muscles but he has no movement yet. He has been able to squeeze the legs together. The outlook remains positive that Jamie can still make a full recovery. He is working hard to get back, approaching these movements like you’d expect an athlete would doing reps in the weight room.

Please keep the support and words of encouragement coming in. Believe me, Jamie is humbled and honored by all the support he is receiving.

A fund has been established to help Jamie with his medical bills. If you would like more information, please visit the Jamie Nieto Fund. 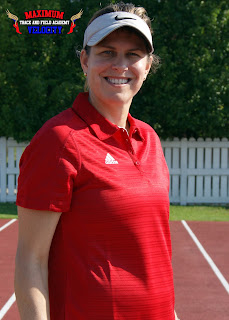 We are thankful that Gwen Wentland-Mikinski will be able to work with our high jumpers again this year in Jamie's absence. Gwen worked with our high jumpers last year, and did an amazing job. She is the 2012 US Olympic Team Women's Jumps and Combined Events Coach. She is a 2-time US champion. She also set the US Record in the Masters (40-44) Division in 2013 by jumping 5' 9 3/4".
Posted by Maximum Velocity Track and Field Academy at 4:44 PM