From the Advocate Messenger: Centre College athletes learned a lot from Olympians at camp 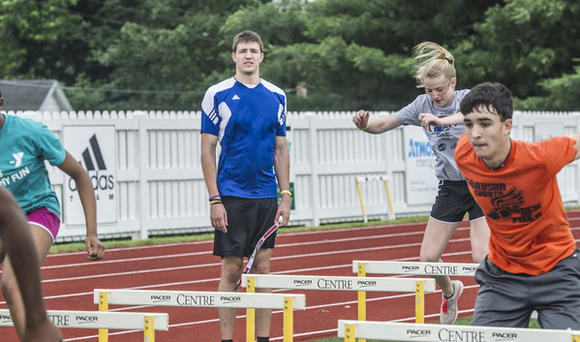 By HAL MORRIS hmorris@amnews.com
Last week’s Maximum Velocity Track & Field Academy at Centre College was not just a chance for campers to get pointers from Olympians. Instead, the Centre track and field athletes who worked the camp also got a chance to get pointers from being around the all-star staff of camp clinicians that included former Olympic medal winners.

Senior Nick Niehaus, who holds the Centre record in the 400-meter hurdles in 53.44 seconds, spent three days with Kevin Young, the man who has owned the world record in the 400 hurdles since 1992.

Niehaus took second in the 110 hurdles and third in the 400 hurdles at the conference championships in the spring, then set the school mark two weeks later at the Gregory Invitational. So he was more than ready to soak up any bit of knowledge

he could from Young to help him improve even more.

to, really willing to give suggestions, talk about workouts, suggestions to improve your race. It’s really awesome.” 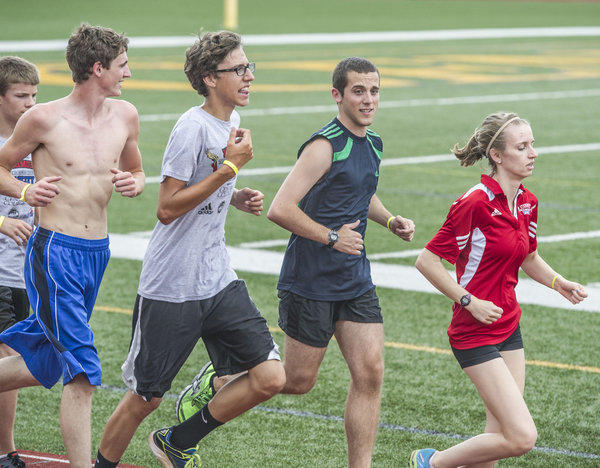 Junior Emily Akin, who won the conference title in the 10,000-meter run and was third in the 5,000 meters, worked all week with Rose Monday and said she has learned a ton from the woman who was an assistant coach for the United States’ 2012 women’s Olympic team.

“All week she’s been talking

about these ‘secret weapons’ and things I tend to take for granted. Things like nutrition before a practice and what a difference that can make,” Akin said. “And just the personal stories she can tell, her trials and tribulations as an athlete, her motivational stories, pointers even down to keeping your elbows at a 90-degree angle, imagine competitors as you go to pass them, speed even after a long distance run.”

Sophomore Jacob Duvall, who attended the camp his junior and senior years of high school, said more than the technical aspects of racing the instructors gave was the mental approach they took that he took away from the time he spent with them.

“To me, it’s all about the skill that you learn

and it’s awesome to learn that and then get the workouts and stuff. But then the examples they give and you learn and the attitudes and the mental aspects, that’s what I draw the most from it. It’s super important to me to get that,” said Duvall, who was fifth in the 110 and 400 hurdles at the conference meet.

“These people’s attitudes, it’s special and to have 10 people show me their attitude and their mental aspects and their journeys and just letting me in on how they got where they were. That’s what I take form it and hopefully I can use that to become so much better and become a Division III All-American. That’s what I aspire to.”

When the instructors weren’t working with the campers, they found plenty of time to talk one-on-one with the Centre athletes. And Niehaus found plenty of new things to work on as he begins getting ready for his senior year.

“(Young) suggested some things to me to work on my race, since I’m a taller hurdler (6 feet, 10 inches) suggesting how your body and anatomy works, how to adust your space,” he said. “Just explosiveness and working on that and just really trying to get in good aerobic shape and just working on steps in between through the entire race.”

Like Duvall, Akin attended the camp before coming to run at Centre. She knew what to expect and knew she would get a lot of great instruction at the camp even while working it.

“As a counselor, it’s fun to balance working with the kids

and the upcoming talent that we’re going to have across the U.S and also getting to meet new Olympians,” Akin said.

And Akin said she may have learned more than the 110 campers who came from 12 different states, including Florida.

“I got more than them because I’m learning things from the kids too,” she said. “So I get to take advantage of the campers and the Olympians. It’s been great for me.”
Posted by Maximum Velocity Track and Field Academy at 9:07 AM