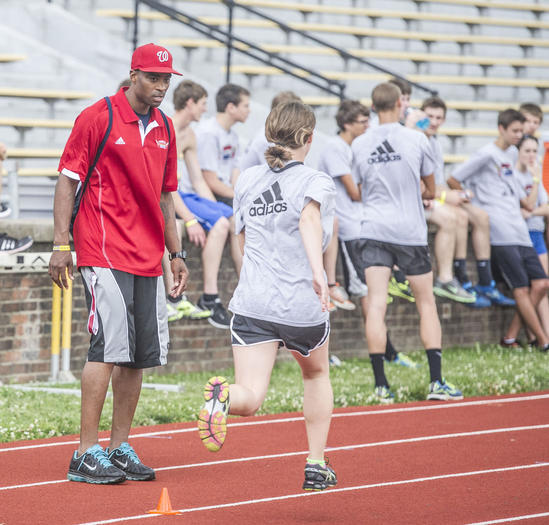 
Walter Davis is a two-time world champion and 2004 Olympian who finished third in the 2012 U.S. Olympic Trials and then announced his retirement from competitive triple jumping after the meet.

He worked at the Maximum Velocity Track & Field Academy at Centre College last week and shared these insights on the camp, himself and more.

Question: What persuaded you to be part of this camp?
Davis: “I like showing kids

different stuff to be better than they are now. A lot of coaches now are just stuck on one thing that they know from years ago. Some kids can’t do things right. It is good to show them how to do things. Just helping them with their drills should make them a better sprinter or jumper just showing them the correct way to do drill.”

Question: Did you grow up going to track camps?
Davis: “No, and that’s why I came, too. I know growing up I liked basketball and always wanted to play basketball. We never had anyone from the area come and put on camps and stuff like that. I know kids probably saw me on TV or the other Olympians (here) on TV. It was like, ‘Wow.’ So why not come and do a camp and meet the kids because growing up I never had that. I always said if I did well, I would always go back and do camps and speak to kids and stuff like that.”

Question: Are you well received by kids or are they in awe of you a bit?
Davis: “It is cool. It takes time. They are shy. They don’t want to ask questions. No one wants to go first. If I am showing them a drill, no one wants to go first and think I am going to be mad or something. We were doing jump drills and nobody wanted to go. Finally one kid

went, but they were still bashful like if they did wrong it was a problem. I had to tell them there is not a problem and that we were just working on things to make them better. If you can’t do it, it’s okay. Just practice and it will be better.”

Question: Do you miss competitive jumping and how do you fill that void now?
Davis: “I don’t ever get that competitiveness out of my system. Now I am done with track. I don’t do track. I play basketball. I am in this little YMCA league, and I am competitive. I want to make sure my man don’t score a basket or I am trying to score. I still have it in me. Then my girl (28-year-old Ebonie Floyd), she is running at USA (Trials) next week and I work out with her and try to keep the competitiveness in me. She runs the 400 and I run with her and I will be talking trash to her trying to make her better. Sometimes she is cool with the trash talking, but sometimes I take it overboard and she gets a little upset. But she knows it is out of love and trying to help her get better. She had a child

and wasn’t able to compete last year in the Olympic Trials. This year she is post-baby and she is training. She won Indoor Nationals in the 400.”

and I just kept jumping. When I played basketball in high school, I jumped over a couple of people trying to take a charge and dunked. Jumping over my little cousins helped that. I was fortunate to have good coaches in high school, junior college and LSU. I had three really good coaches. Without those three guys, I would not have done what I did.”

Question: How did you go from all-state basketball player to track star?
Davis: “The school (Barton County Community College in Kansas)I went to, I was told I could do both. When I got there, it was something you could have only so many out of state players. My junior college coach (Lance Brauman), who coaches Tyson Gay now, asked me how many 6-2 point guards in the league (NBA) right now and I told him a lot. He then asked how many 6-2 triple jumpers can go 56 feet. I was like, ‘Not that many.’ Then when I went to the Olympics, basketball was out of here.”

Question: What do you remember best about your Olympic experiences?
Davis: “It is just everything. Just walking through the opening ceremony was crazy. Going to Olympics was my first time going overseas. Imagine getting on a plane for 12 or 14 hours from California to (Sydney) Australia. That was my first time on a plane that long. I was like 20, 21. Then the stadium was like a big football stadium and was packed. It was unreal.”

Question: What was it like to be part of the LSU national championship team and get to visit the White House and present Bush with a LSU warmup?
Davis: “That was a big moment, too. I was coming from Europe or somewhere and my coach called to say we were going to the White House. I wasn’t going to be back in time. I did make it in time, but the bus was gone to the airport. I had to drive an hour just to meet up with them so I could go and present the award. It was awesome to meet the president. Not that many people can say they have met the president. It is something I can show my daughter when she is older that dad did make the president. It shows you can be from anywhere and make it. It’s not just one thing. You can become whatever you want to be. My picture was in the paper all over Louisiana and everybody in my family was calling me.”

Question: Any chance you pay attention to Kentucky basketball and John Calipari now?
Davis: “I watch basketball. I watched the whole NCAA and was pulling for Florida Atlantic. Louisville had a real good team and the coach (Rick Pitino) they’ve got, he is a guru. They put up a real good performance. I know a little bit about Kentucky, but not much. I watch then some. It’s crazy how Kentucky won it one year and then Louisville the next year.”

Question: Do you ever get back to LSU now?
Davis: “I go every now and then, but coaches that were there then are not there. I don’t go back that much. I am in Houston now. I work a 9-5 to now. I go to work, get off, go work out with my girl and help

her get ready for her meets. Then I have the baby, and she is work as well. I go play basketball. Working 9-5 and working out with girl and playing basketball, that is a lot of stuff. I work at Exon plant. I am a technician. It’s not hard work.”

Question: Looking back on your career, what are you most proud of?
Davis: “Just being humble. I have won titles and stuff, but I have never denied anyone a chance to take a picture or get an autograph. I am cool with that. When I started, I used to see people take a couple of pictures and then it was like, no, they didn’t want to take more. These people are coming to watch us run. I couldn’t understand why you couldn’t take a picture if they were paying to see us. Some of the big names I used to see do that.
“I just want them to remember not only was I an Olympian and world champion, but I am a real human being that loves helping

kids and people. You can’t go from being a good person to ... you have to know where you came from. You just can’t get to the top and be like you are bigger than everybody. You can’t look down on people. You have to stay humble. Now I see the ones who didn’t want to sign autographs or take pictures and I bet they wished they had signed for the kids and people now.”
Posted by Maximum Velocity Track and Field Academy at 9:09 AM