From the Advocate Messenger: Giving back important to world record-holding hurdler Young 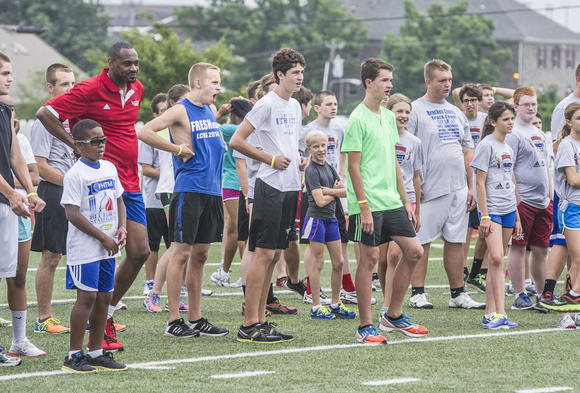 By MIKE MARSEE marsee@amnews.com
Kevin Young says every young hurdler who aspires to greatness should have his picture on their wall.

As the only person ever to run the 400-meter hurdles in less than 47 seconds, Young is the gold standard for hurdlers around the world, and he said he should also be the goal for youngsters who are serious about becoming elite hurdlers.

“If you don’t have a picture of me somewhere and you’re not playing target practice, I know you’re not serious about your job,” Young said.

Young, whose world-record time has stood for almost 21 years, regularly works with young athletes, just as he is doing this week at the Maximum Velocity Track & Field Academy at Centre College

He remembers getting to know and even run with some of the biggest names in track and field when he was on his way up and how many of those athletes served as role models for him, and he wants to do the same thing.

“We all have a shelf life, so it’s good to make sure you communicate

with those cans on the shelf while you’re on the table, before someone else puts you up on the shelf, while you have someone to talk to,” Young said. “If you see me at a track meet, I’m very approachable, you can come up and introduce yourself, and I’ll introduce myself to you just to know who you are. I wouldn’t want to be remiss because I didn’t know who the next great young hurdler is. I definitely want to know.”

For now, the record of 46.78 seconds that Young set in the 1992 Barcelona Olympics still stands. But he said the next great hurdler is out there somewhere, perhaps at the Centre camp, one of only three high-level camps he’ll work this year, or at one of the camps or meets he works in his role with USA Track & Field Georgia.

Giving back is important to Young, who serves as the athlete advisory chairman for USATF Georgia — among his roles is re-introducing collegiate athletes to USATF after their college eligibility is gone — and works with Boys and Girls Clubs

“It’s something that I want to be known for doing,” he said. “It’s always good to have a youngster there, because a lot of them don’t know about the Olympics. I get the opportunity to get in their face and say ... ‘I’m Kevin Young, I’m Google-able, and just go check me out.’ And once they’ve done that, they’re like, ‘Wow, you’ve really done those things.’ And I say, ‘Yeah, and you can, too.’

“It’s always fun because you always see that diamond-in-the-rough athlete or that young athlete you can encourage and say, ‘I believe in you, so you should be able to go out there and believe in yourself and do your thing.”

Young said he remembers getting to know Olympic great Carl Lewis when he began running for the legendary Santa Monica Track Club while still in high school in the mid-1980s.

“When you’re a fan of an athlete and all of a sudden you become their peer, you’re still a fan, so it’s hard to be cool. I found myself many times gawking at Carl, looking at him, going, ‘Wow, that’s Carl Lewis!’ he said. “He used to say, ‘Kevin, quit staring at me. We’re having dinner. You know, it’s rude to look at someone’s mouth while you eat.’

“I always remember how I felt when I was around these superstar athletes — Edwin Moses, Calvin Smith and Roger Kingdom and those guys — because I was a high school senior in ’84 watching those guys run in L.A, and for me to make my evolution as an athlete while they’re still in their careers ... and I’m a USA team member

, I’m like, ‘Wow, I’ve really come up.’ There were a lot of great role models, and I remember that.”

Young, who went on to compete in two Olympics and win one world championship, got to meet another one of them for the first time last year when he came to the Centre camp for the first time when he roomed with Dave Wottle, the 1972 Olympic men’s 800-meter champion who was known for wearing a cap during his races.

“Dave Wottle was a childhood hero of mine, and I never in my life thought I’d meet him. And I get here, and I go to one of the dorm rooms to check in, and (the sign says) ‘Kevin Young and Dave Wottle,’” he said. “And I’m going, ‘There’s only one Dave Wottle,’ and I didn’t know he was going to be here, and he’s my roommmate, so I was just ridiculus at that point. I don’t want to disturb him and bother him, but that’s Dave Wottle. I reverted that quick, and I had to tell him how growing up I watched his race, and I got the background story behind the cap, things I thought would never happen.”

He said he got a cap autographed by Wottle, and he uploaded a photo and a link to a video clip of Wottle’s 1972 race at Munich to Facebook.

“And I was that kid

. I wrote, ‘You’ll never guess who I hung out with this week, the great Dave Waddle,’” Young said.

He said many of his friends who are his age or older know all about Waddle, but he said the post gave younger runners who saw it a chance to learn about Waddle.

The runners at Centre this week might also be Googling Young, who said he has been impressed in his two trips to the camp.

“Last year was my first time here, and I was floored at the camp and the dedication of the young athletes. Any time I get an opportunity to go out there, to run my mouth, to run and jump over a couple hurdles ... it’s always cool to give them an opportunity to say, ‘I spent my weekend at a camp with the world-record holder,’” he said
Posted by Maximum Velocity Track and Field Academy at 8:56 AM