From the Advocate Messenger: Middle-distance standout Monday was a shy child but 'was always fast' 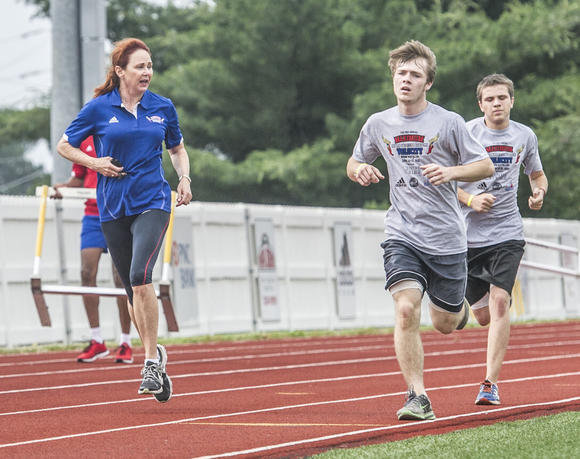 in Northridge, Calif. The race took place against a group of high school aged neighborhood boys, while Monday was only in the eighth grade.

“My siblings and I were always outside as kids running, climbing, jumping and just playing around,” Monday said. “I was always fast

when I was a kid and running races was my favorite thing, but I never really thought anything of it.

, however, recognized her talent from her victory against the neighborhood boys. A few days after that childhood race, he enrolled his daughter in the local track team —  a decision Monday was not thrilled with.

“At the time I was painfully shy so I was just terrified that if I was on the team I would have to run against people in public,” Monday said. “Sure enough the coach had me run in a race. I remember I was wearing this pair of old Keds sneakers that had been given to me by the girl across the street. They weren’t running shoes at all and were a bit too big for me anyway. I was running against kids

with spiked running shoes but somehow I managed to beat them and from then on I was sold. If I had lost that race who knows what I would be doing now.”

Even with her newfound love of the sport, the idea of running professionally never occurred to Monday. It wasn’t until the 1968 Olympic games that the current coach for world class endurance athletes would begin her own path to the Olympic trials.

“I was only 11 when I saw the 1968 games,” Monday said. “I was watching the track events and saw Bob Beamon break the record for the long jump. He won an Olympic gold medal for that event, but when I saw him up there on that Olympic podium I knew that’s what I wanted to do. I set a goal for myself to one day be on one of the Olympic teams.”

Monday went on to compete in three Olympic Trials and win the 2001 gold medal at the Masters World Championships in the 800-meter run and the silver medal in the 1500. Later she won the gold medal at the 2004 Masters U.S. Olympic Trials in the 800. Today, though, Monday has found herself in the new role as coach. This week Monday is working as a coach at the Maximum Velocity Track & Field Academy at Centre College, but she has been coaching for about 20 years.

“When I first stopped running my coach told me that I would make a really good coach but I didn’t consider it at first,” Monday said. “I’ve always thought that just because you’re a good runner doesn’t mean you’ll make a good coach and I had no idea how to coach.”

Even with her initial doubts, Monday went on to serve as the 2012 Assistant Coach for the U.S. Olympic Team’s endurance athletes and still coaches world class athletes. As a former competitive runner, Monday finds that her passion for coaching comes from her connection

“I get so close to the athletes that I work with because I know what they’re going through,” Monday said. “I know the patience and discipline that it takes and I understand the goals they have. When I see my athletes out there working so hard and watching their bodies adapt and grow stronger, I can’t help but feel proud of them.”

Her love of coaching is what brought Monday to the Maximum Velocity Track & Field Academy this week. Despite this being her first year at the academy, Monday is already impressed.

“These kids have been so motivated this week. It’s great to watch them work at the drills that we’ve been doing and seeing how much they truly want to learn. It’s made the whole event exciting,” Monday said.

Besides basic skills and athletic drills, Monday hopes to instill other lessons in the campers.

“For these kids I want to teach them two main things,” Monday said. “The first is to believe in themselves. People will always tell them that they can’t do it or that they’re wasting their time, but they should never listen to them if this is what they are truly passionate about.

“Secondly I would say to take care of the little things. They have to make sure that they are hydrating, eating the right foods, keeping a good form and other things like that. Paying attention to details and keeping discipline is what makes a successful athlete.”
Posted by Maximum Velocity Track and Field Academy at 8:58 AM