From the Advocate Messenger: NBC analyst Boldon says Kentuckian Gay has proved him wrong with comeback 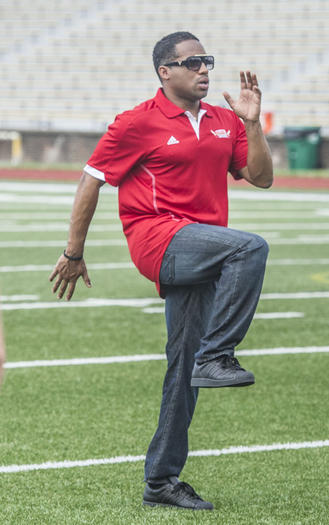 After being hampered by injuries, Gay has put together a strong 2013 season that started with a 100-meter win in 9.86 seconds in Jamaica, and recently won the Adidas Grand Prix 100 in Manhattan in 10.02 seconds.

“It is encouraging because I was one of the people who did not think we would see Tyson back at full strength consistently any more. He spent most of the offseason saying, ‘I am back. My injuries are behind me.’ And so far in 2013, that is exactly what I see,” said Boldon, who is working at the Maximum Velocity Track & Field Academy at Centre College this week. “He ran well in Jamaica. He ran well in New York.

“I think they are pacing themselves. He is not trying to run everywhere. He is picking and choosing his spots and running where he feels comfortable and when it feels right. Right now I have Tyson in both the top 3 in the world’s (championship) in both the 100- and 200- (meter dashes). Assuming he does not get injured, he will be in the top three at the world championship in both.”

Gay won golds in the 100 and 200 as well as the 400-meter relay at the 2007 world championships, but wasn’t able to capture his first Olympic medal until London last summer when he and the American relay team finished second behind Jamaica.

Boldon remembers when he was injured late in his career and knows how hard it is to try and overcome injuries as Gay is trying to do.

“When I turned 30 and started to have all sorts of injuries, I retired. There are some athletes who have the patience for rehab and coming back and dealing with it,” Boldon said. “The hardest thing for a sprinter is rehab. It is the most opposite thing to what you naturally do. You have a race horse pent up in a stall. It’s not what he was born to do. He was born to be out there running. I couldn’t handle the whole rehab and I retired.

“Tyson has time and time again said, ‘I am coming back, I am done not yet. My best years are ahead of me.’ Guys like me who know what it is like for sprinters over 30, we were skeptical. But he has proven myself and many others wrong. I never thought I would see him run another 200. But he’s done that.”

But what about the 2016 Olympics? Could Gay, who turns 31 in August, have the staying power to again chase an Olympic medal?

“That is a different kettle of fish because people may say only three years away, but that’s hard,” Boldon said.

He referred to watching a show on National Geographic where one minute a lion “is on top and has his big mane and is dominating” and by halfway of the show “he has been beaten by one of the younger ones” and is on his way out and left to die.

“Obviously, that’s a little dramatic but at the same time but that is what the world of sprinting is like. When Tyson Gay was world champion in 2007 in the 100 and 200, Usain Bolt was barely on anybody’s radar,” Boldon said. “Eleven months later Bolt is unbeatable. It changes really quickly. You can say Tyson will make the U.S. team in three years, but we don’t know. There may be some kid who is a sophomore in college now who is getting ready to be the next guy.

“With Tyson, it is a year to year thing. I don’t think it is the most outrageous thing to say he will make the Olympic team in three years if he stays healthy, but a lot can happen in three years, especially when you are past 30.”

Boldon, 39,  is a four-time Olympic medal winner. Only three other men in history — Bolt, Frankie Fredericks and Carl Lewis — have won as many Olympic individual event sprint medals. In 1999, Boldon ran 9.86  twice in the 100 before sustaining a serious hamstring injury which forced him to miss the World Championships. However, he won two medals at the 2000 Olympics.

He was injured in a head-on crash with a drunk driver in 2002, and never again ran sub-10 seconds in the 100. That accident left Boldon with a serious hip injury.

He’s back here because he had “fun” last year when he came and is close friends with camp organizers Jackie Joyner-Kersee and Sharrieffa Barksdale, who lives in Lexington. He says Joyner-Kersee is the reason he went to UCLA.

“I feel like I can never fully repay my debt to Jackie,” he said. “I enjoy it, it is well run and the kids are great and is being put on by people I respect.”

Boldon, based on the way he was taught by his mother, talks to campers much like he would elite athletes.

“When I talk to young kids, I explain things not too much over your head but in the way I would say to a group I was getting ready for a professional track meet or NFL combine,” Boldon said. “There should not be a big gap in how we teach young people and how we teach adults.

“When I go and watch the best baseball coaches, there are things inherent in a good swing whether it is a softball or baseball. There is a certain way to shoot a free throw in basketball. There is a way to pass. For all these other sports in America, there is not a big gap in the fundamentals and what they are taught from youth to pros. But for track and field, there is this big gap. I challenge that and think kids get it.

“When I see improvement in anybody I work with from day one to half hour later, I always feel encouraged. If you give them the information, they can process it. My classes don’t change very much based on who I am teaching.”
Posted by Maximum Velocity Track and Field Academy at 9:00 AM